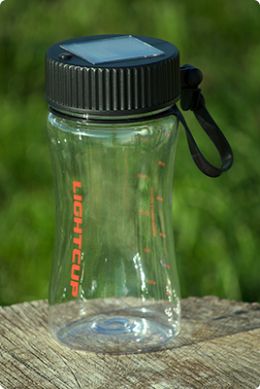 Going Camping, a day out Rock climbing in the mountains or want an eco-friendly lamp to introduce your children to solar powered lights.  Well, Select Solar  has come up trumps just for you.  A water bottle that doubles up as a solar powered lamp so your drink through the day is also your light/lamp for the evening.

The Light cup is the ideal light to be used in 3rd world countries such as Africa and Asia, as it is lit up by a small solar panel in the cup’s lid.

The Light cup can be used for 2 useful functions It would hold water for a drink throughout the day and then at night it doubles up as a light so would get rid of the kerosene light and make it easier and more healthy for the children and the rest of their family to either do their homework or at least be able have a light within the home that they could sit around and talk to each other.

The Lightcup™ water bottle makes a great present for the devoted adventurer or for introducing your  children to an eco-friendly solar powered light.