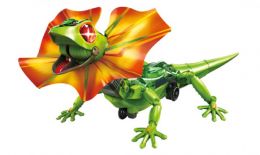 The frilled lizard can be very colorful and it is famous for the big ruffled collar around its neck and its photogenic posturing with the big collar that makes it look like a lizard satellite dish. This lizard is an intimidator to its foes, expanding its collar to frighten away its enemies. The collar actually  has  a diameter of about 26 cm when it is erected, and makes the lizard look larger in appearance and size than it actually is, which is a big part of their successful scare tactic. It has a large mouth which works in conjunction with the collar around the neck – it always opens its mouth real wide when it puts on its “don’t mess with me” stance and it rolls its tail about for added effect. If the lizard feels like it is in danger of a predator, like a feral cat for example, it will put on its scary face to buy some time and then get up on its hind legs and runs away to look for a tree to climb to safety. For months we have observed these special characteristics of the Lizard  and have created a toy with these very appropriate features. All these artificial intelligences are programed in a IC and included in our new electronic battery operated kit. Assembled it is  37 cm long.

In operating modus  1  once if it feels in danger it opens the mouth , the green/red LED eyes are flashing, then it is bluffing and trying to escape. it can also move around detecting obstacles and avoid them  by its infrared sensor.


In operating modus 2  it is bluffing the attacker by popping up its frill.  When the attacker walks away it will follow him like a pet. Let´s be your own pet.